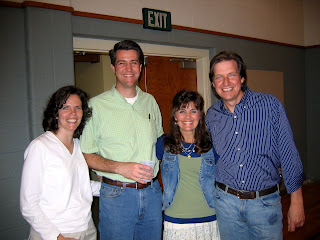 **Paul and I with Wendee and Dan at a ward activity we went to on Friday night.** 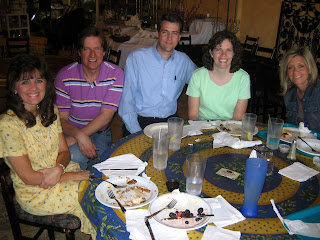 **This is Wendee and Dan Truman, me and Paul, Rhonda. We were at Chef's Market for a very YUMMY dinner.**


It's taken me a couple of days to get these pictures together so I could post about our trip to Nashville.
It was a great long weekend away. Highlights and thoughts about the trip:
**It was a long flight and this was traveling without children!! We stopped in Chicago on the way there and there were major delays due to Air Traffic Control coverage. We were lucky and were only delayed about 45 minutes. I read on the flight and slept. I got a little bored and kept wondering what am I going to do when we fly to Orlando in Florida with 2 toddlers and Taylor.
**Nashville is beautiful. It's very pretty right now with everything in bloom. It's lots of green rolling hills.
**Went to see the Temple. It is small. It's next to a stake center and is much smaller. It looks like it got squashed flat. I'd planned to do some work at the temple while Paul was at his work meeting but the temple wasn't open that morning. It is only open at certain times and you have to have an appointment to do the work. Bummer.
**We had a great time with Paul's cousins, Dan Truman (of Diamond Rio fame) and Dan's sister, Rhonda. Dan has lived in Nashville for over 20 years and was an awesome tour guide. He showed us downtown Nashville and told us lots of history - both US and family. We saw music row where most of country music is recorded and produced, Vanderbilt University, Grand Ole Opry - the old and the new buildings.
**Went to an actual movie theater to see "Work and The Glory III"
**Had fun on Friday night checking out the music scene in downtown Nashville. Went to Roberts Western World - a bar where the band (BrazilBilly) plays old time country music. It was great weather and spring break for some so it was crowded with a variety of people.
**Loved sleeping in on Saturday.
**Enjoyed a great 4 mile walk at a wooded park near Dan's house. It was so green and pretty.
**Loved spending time with my hubby!!!!!
Posted by Lisa at 9:29 AM 3 comments: 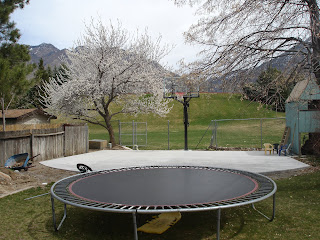 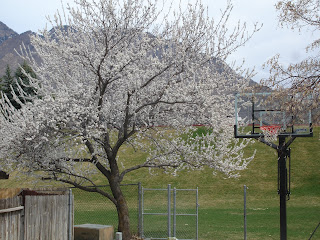 ... popcorn popping on the apricot tree."

Every year when I look out our hall bathroom window and see this tree in bloom it reminds me of that song. I had to take the pictures today because come Wednesday those blossoms probably won't be there anymore - due to the rain and snow expected :(
Posted by Lisa at 2:27 PM 1 comment:

Spent part of the weekend in Boise, ID for a volleyball tournament. The tournament was really just a disguise for a girl trip. Brooke and her 3 friends in the ward that play on the club team and all 4 mothers went up to Boise on Friday. I'm not a big fan of road tripping but it sure is fun when you're with girlfriends. We made it all the way to Tremonton before we stopped and had lunch. We got to Boise about 5:30 and checked into the Courtyard Marriott. Nice place for a decent price. Unfortunately Brooke started feeling sick (sore throat, chills, fever) on the way up so she spent most of Friday night in bed while the other girls were out to dinner and swimming with the rest of our team. Luckily she felt a lot better Saturday morning and was able to play her best games in the morning. She started crashing in the afternoon and didn't play the last couple of matches. The team played really well and won their bracket. It's fun to watch the team play and improve. Best of all was the time away with Brooke and our friends. The only bad part was we had to drive back Saturday night - left Boise at 6:30 and drove into SLC at 1:00 am. Next year we're staying and coming back on Sunday. There's nothing better than a fun girl trip.
Posted by Lisa at 7:28 AM 5 comments:

The car wash is not an great adventure for all ages. I filled up the van today and it desperately needed a wash. Jared and Kamryn were with me and I was pretty sure it would freak them out but I went ahead with it anyway. Both of them had huge eyes as we drove in. I tried talking them through it and they laughed when all the soapy bubbles were sprayed on but then when the big forceful spray started washing the bubbles off they started freaking out. Kamryn lost it first and was bawling and terrified and then Jared joined in. They were both gripping my arm and hysterical. They didn't like the dryer either. When we were finally done it was Jared could talk about all the way to Sam's club - "car wash" over and over (of course I was the only one that could understand what he was saying). I guess we won't do that again soon.
Posted by Lisa at 2:33 PM 2 comments:

Just a few "bits and pieces" thoughts for the day:
**I taught in YW today. I teach the Beehives and we have about 10 girls in our class. Today we only had 6 girls there and it's amazing how different the class was. Usually the lessons go okay but today was great and I felt really good about it and I think the girls really liked it and got something out of it. The miracle in this is that I didn't really start on the lesson until about 10:00 last night and I was up working on it until about 12:30 and we had church at 11:00 (really 10:00 in my head due to daylight savings times). The lesson was on being a peacemaker and we played spin the bottle to discuss situations of how to be a peacemaker.
**Due to the late night I was so tired after church so I decided to lay down for a short nap. I fare much better if I just lay down for 30 min - I'm too groggy if I really nap. But I must have been tired because I napped for almost 2 hours. I woke up with a start at 5:22 and freaked out. We were having dinner with my family at my mom's and I needed to put green bean casserole in at her house at 5:15. So I had Justin run it over there and then I forgot about it until about half way through everyone dishing up at dinner and Paul said "where are the beans?" I had totally forgotten about them and they were very well done with all the little french's onions burned. Naps are just not good for me.
**Can't believe Rob and Amber got out. I thought for sure it would be a non elimination round. I guess it came down to karma and they played dirty on that round and came back to bite them. We're really pulling for the beauty queens now. I'm going to have to worry about my husband though - he said "I'm all over the beauty queens now."
Posted by Lisa at 10:21 PM 2 comments:

I finished the Book of Mormon today. I started it on Sept 11th. I try to read every morning after the kids leave for school and before Jared and Kamryn get up. For most of it I've listened to it and followed along at the same time. I really like doing it that way and feel like I've gotten so much more out of it. Now I'm going to read the Doctrine and Covenants (because Paul's reading it right now and he's downloaded it into our iTunes library).
Posted by Lisa at 9:30 AM 1 comment: 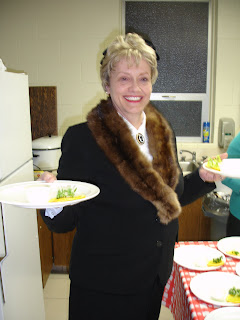 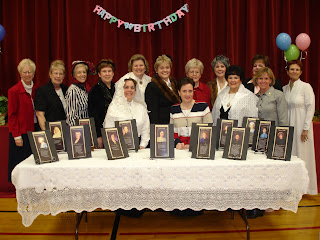 Our Relief Society birthday dinner was Tuesday night. The program was women who dressed up as former General RS presidents and told about "themselves". My mom was all dressed up and when I walked in I felt like I was looking at my grandma.
Posted by Lisa at 9:16 AM 4 comments: 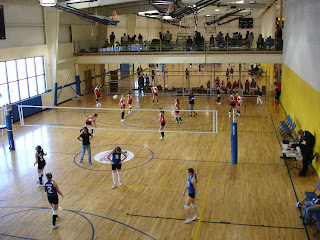 Brooke played in another tournament last weekend. This was a 2 day-er - Friday from 3:30 - 10:30 and Saturday from 7:30 - 7:30. This was a "reseeding tournament" so that is why it was 2 days. They played Fri and Sat morning at Open Court. I love that place. What a great facility. The spectator section was above the court so it was a fun way to watch. I was able to go Friday night without Jared and Kamryn, which was nice because I was able to just watch the team play and concentrate. Saturday was another story. We ended up having Jared and Kamryn at most of the tournament, which was CRAZY!!! I couldn't leave because I hate missing when Brooke plays. She's getting a lot better and is therefore playing more. She does a great job in the back and also played the front and did well. She had one awesome spike (HIT for those who know the correct terms). We were all cheering and excited and Justin looked up and said "What'd she do?" It was funny. I was just glad he came to support her. He must have liked it because he ended up going to the whole tournament on Saturday.
The next tournament is in Boise ID. Our 4 girls and mothers are going. It will be a fun little mother/daughter weekend. I'm really looking forward to it just for the chance to get a break from my little gremlins.
Posted by Lisa at 9:59 AM No comments: 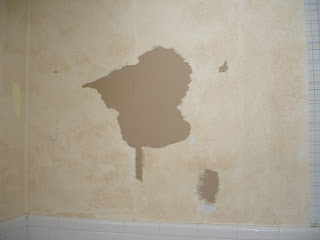 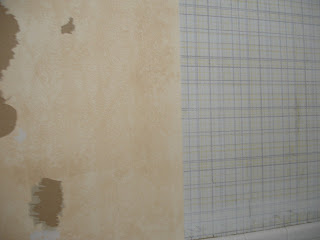 Well, the bathroom project has gotten pretty complicated as you can see. I'd planned to put beadboard up over the 1st layer of wallpaper and even bought one sheet of the board. When I put it up it didn't look good - too many lines with the tile below it. So now I have to paint -which meant painting over the wallpaper or taking it down. I decided to take it down which was probably a bad decision. I've got major areas where the wallpaper did indeed take off the wallboard. What a mess. I've spent a lot of time getting the walls cleaned up. Whoever put up that paper did it with wheat paste. After spending most of the day yesterday I've got all the paste off the walls and then washed the walls. Now I've just got to patch the tears and holes - which I have no idea how to do but I guess I'll learn. Paul wants me to wait for him to do it but who knows when that will be since he's got his own bathroom project downstairs. So I guess I'll go to Home Depot and learn how to patch walls.
Posted by Lisa at 9:31 AM 1 comment:

I did pretty good on my February goal. As you can see, I posted 25 times in February which is way more than I normal. So I'm going to try to keep up with regular posts, just not every day (which will be relief to some, I'm sure).
Posted by Lisa at 7:03 AM No comments: 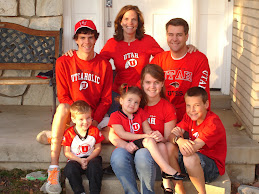 Blogs I Spy On

Lisa
SLC, Utah, United States
I am the mother to 3 teenagers, and twins who are 6! Yikes!!